Do you trust people? Do you trust yourself? Our trust is usually developed when we're around zero to three years old.  We all go through a very similar psychosocial development in early childhood that forms us as adults. For those suffering from addiction, understanding these psychosocial stages starts the process of recovery. 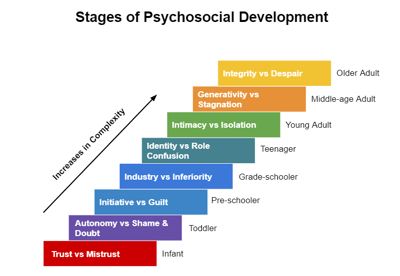 Basically the theory boils down to this: Life is a series of lessons and challenges which help us to grow. Erikson's psychosocial development theory helps explain why.

Erikson first published his 8-stage theory of human development in 1950 in a book called  "Childhood and Society." In a chapter called 'The Eight Ages of Man' he put forth the foundations of the psychosocial development stages.

According to Erikson, emotionally we all grow up in 8 predictable stages.

Do you trust people? Our trust is usually developed when we're around zero to three years old. When we are small children, if we receive the proper love from mom and dad, we're fine. The things we worry about during this stage of life include getting fed, being comforted, teething and sleeping. If we're in an environment that is really abusive or there's some trauma or neglect during this time, then it's likely that trust didn't develop.

As we move forward in life it can sometimes become very scary. All the other psychosocial developmental stages and milestones are really founded in trust.

Virtues that are develop during this stage include hope and drive, which will inspire and motivate us later in life. On the other side of the coin, we can develop "sensory distortion" -  where we form an illusion of reality - and the tendency to withdrawal from our surroundings if trust is not nurtured and developed during this stage.

Inititative develops in the next psychosocial development stage. During this time we move away from the womb and learn to complete things. If problems occur during this stage it can be very difficult to get motivated and follow through on projects later in life. During this time, children experiment with their environment - this is why play is so important. If they lack confidence, they most likely won't even try. So initiative doesn't really get developed.

Key milestones during this stage include toilet training, coordination, walking and running. We develop our will power and self-control during this time by learning about consequences to our actions. Alternatively, if we don't learn these lessons well, we tend to become impulsive, which can be a big contributor for substance abuse later in life.

We develop self esteem in the next psychosocial development stage, driven by our achievements and accomplishments. If we have confidence in our abilities, then we tend to feel good about ourselves in comparison to others.We think, "I'm just as good as everybody else."

If we feel inferior and lack self-esteem, however, then we misperceive that other people are more important than ourselves. People who lack self-esteem try to find worth through others and tend to become people-pleasers. They begin to feel like an outsider looking in. It's very difficult to be in a place of having no self-worth, no esteem.

Through our achievements and accomplishments, we also develop confidence, a purpose, and direction - I'm on a path and feel good about it. Alternatively, without proper self-esteem development, people become inhibited, closed in, and can lash out with ruthlessness.

As an adolescent the development task is creating a self-identity. This is the time when a person must come to terms with their purpose in life and begin to answer "who am I?" Are they gay, straight, Republican, Democrat? During this stage it becomes a battle between fitting in with peer groups and social norms or becoming one's own person.

If we have difficulty during this stage, then there's quite a bit of identity confusion. Middle school and high school is the time to develop who we really are and with all the stress that goes on in those places.

Coming out of the adsolescent psychosocial development stage, we should have a clear sense of devotion and fidelity. Without this, we're at risk to develop fanatical tendencies and repudiate and rebel against social norms.

In this example, we end at the stage of intimacy development. Intimacy means being in close quarters with another. If we don't trust and don't have a strong sense of self, then the notion of being intimate with another can feel very threatening. More than likely, people who fear intimacy will lash out through an angry outburst or run away when they feel trapped.

As we get older and become adults, we get increasingly exposed to life's realities and stresses. During stressful times, what tends to happen is that the mind will regress to our first wound and get stuck there. It's a defense mechanism to try to get safe, but at the extreme, we can neither think nor cope. Sometimes we can't even talk and we'll panic. At this point, many people will turn to alcohol or substances to numb out.

A lot of the clients we see are dealing with these developmental issues that will literally debilitate them. They're stuck in mistrust or just trapped inside their houses. And it's a good opportunity to really tease this apart and work it out in order to move on in your life.

If you'd like to learn more about how to treat addiction by addressing the underlying causes, download our free eBook:

Gregg helps get the word out about The Clearing. When he’s not riding his bike and enjoying the beauty of the San Juan Islands, Gregg loves to cook and spend time with his family.